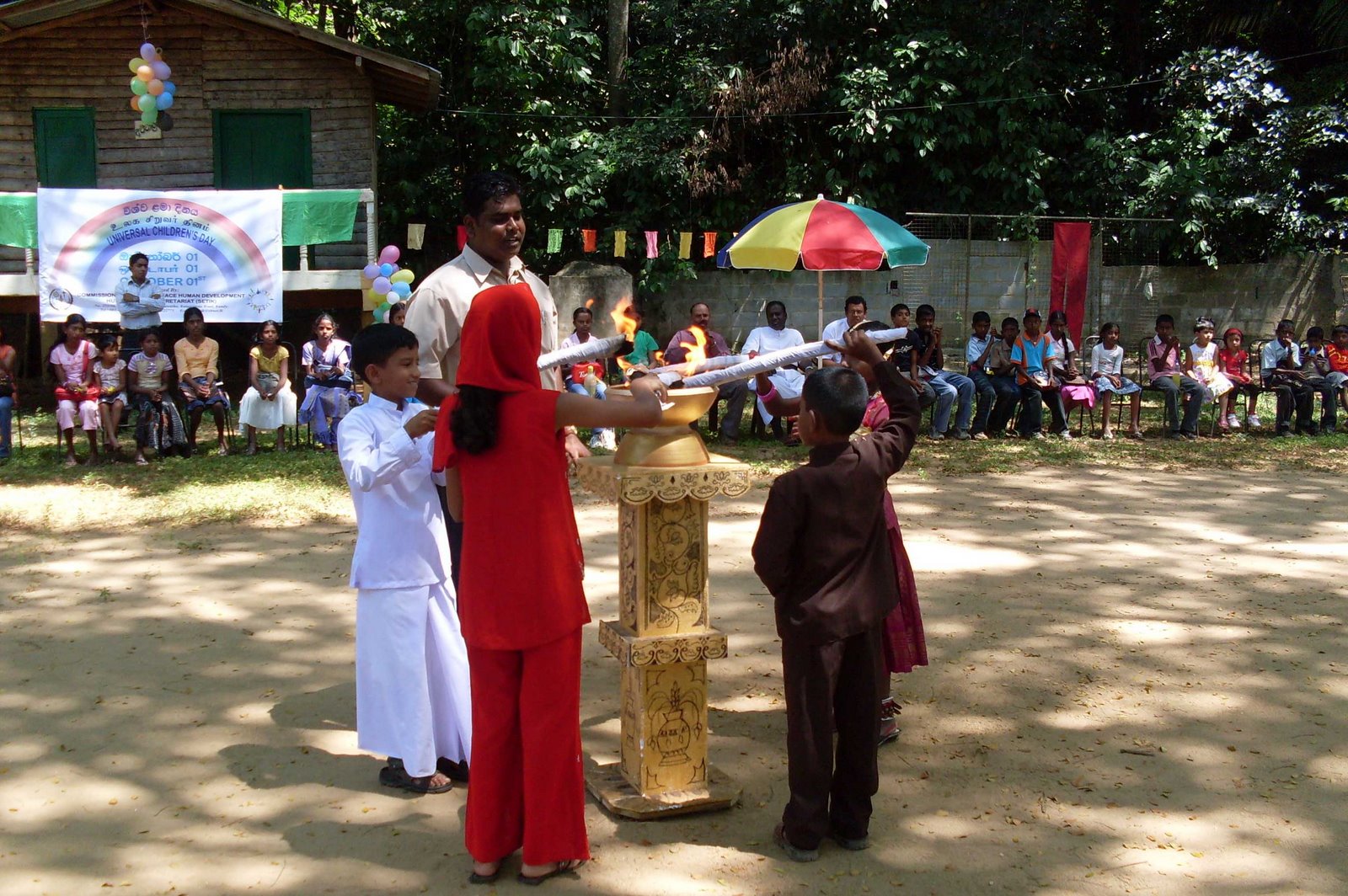 Commemoration of universal children’s day was celebrated, on 1st October 2008 at the “Elephant Walk” grounds in Katugastota, Kandy. About 250 children of different races and religious participated in it from different parts of the District of Kandy and Matale. The aim and objective of this celebration was to instill in the children positive concepts on peace, cordiality and good-will. The programme included rhythmic songs and dances, short drama and magic show. All the participants enjoyed the day and benefited by the programme.

These two programmes were organized by the children’s unit of “Setik”.

Currently we are in a period of time when Peace is most disturbed, less talked about, and most neglected. In spite of such hindrances “Setik” Caritas Kandy celebrated this International commemoration of Peace Day with a very relevant programme on 22nd September 2008 at the Luxmi Hall, Hatton. This programme was to voice for Peace and commit ourselves to promote Peace in Sri Lanka. The theme of our celebration was “Peace gives live”.

The programme was composed with a blood donation campaign, commemorative celebrations and a dialogue session.

Blood was given for Peace and not for war. People came forward generously, youth and adults to donate blood to enable life. We are very grateful to the medical staff of the Government Hospital of Nawalapitiya who volunteered to give their services to carry out this campaign. Also, we thank the 51 generous blood donors.

The celebration commenced at the Luxmi Hall, Hatton at 10.00 a.m. on 22nd September with an introduction of the days programme by Rev.Fr. George Sigamoney Director of Setik Caritas Kandy. He placed before those assembled the aim and objectives of the day. Traditional lighting of the lamp and the taking of the oath was followed by an Inter Religious prayer service. The religious leaders also presented to the participants their special messages for Peace. The chief priest of Ukkuwelwatte Buddhist temple venerable Nugaliyadda Shantha Ratna thero delivered the Buddhist message of Peace. Rev.Kurukkal of Danawela Hindu Kovil presented his message, Chief Moulavi of Jumha mosque of Hatton delivered the Islamic message of Peace, and Rev. Fr. Nilanga Dias presented the Christian message of Peace.

Debate on the theme of the day “Development of country depends on Peace and not on war” This session was conducted in Tamil language. This was presented by the trainees of the Teachers Training Collage of Talawakelle. This programme was a very fitting finale to the days activities.

A vast crowd of over 1000 participated in the programme. We are very thankful to our partners from abroad and the representatives from National Caritas whose presence with us on that day enhanced our programme. 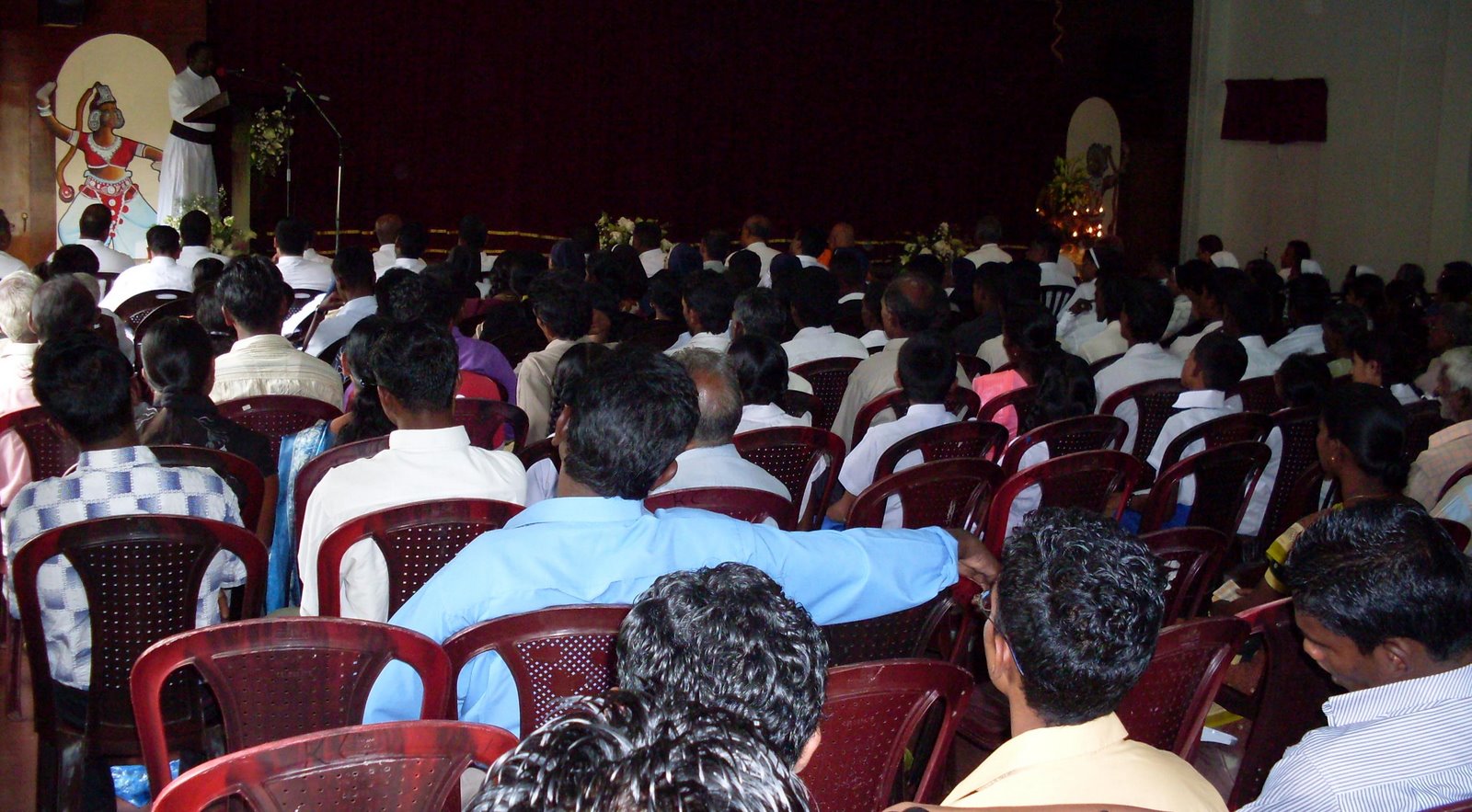 To mark the 40th anniversary of Caritas Sri Lanka Sedec the Justice Peace Human Development Human Rights Secretariat Setik Kandy organized a days’ programme on the 16th June 2008 with its community leaders, beneficiaries, grass-root level committees and school children of the central province. The Chief Guests were Rt. Rev. Dr. Vianney Fernando – Bishop of Kandy, Rev. Fr. Damian Fernando – National Director of Caritas Sri Lanka, Ms. Anne Bousquet – Country Representative of CRS organization. To mark this occasion the animation unit of Setik Kandy organized a trade exhibition which comprised of nearly 20 stalls of the produce of the activities of people and an exhibition and a sale of the 10 sewing centres of Setik, to help the rural people in the Parishes. Prior to this event an art exhibition was conducted among the school children on the following themes. “Let us eradicate child labour,” “Tomorrow’s Sri Lanka”, “Let us protect our resources,” “The migrated mother”. The five houses that were constructed for five poor families were handed over to them on this same occasion. With the help of the CRS organization 18 line rooms were renovated in the district of Matale. In the same four estates 218 toilets were constructed and water facilities were provided for those living in them. This project was completed and the constructions were handed over to the beneficiaries officially by Ms. Anne – the Country Representative of CRS organization.

SETIK Caritas Kandy is working on this problems related to migrants for over five years now. During these five years the number of complaints we received were many. Even though we were able to help these victims’ in different ways still we believe as a country as the Authorities there should do a lot to safeguard our migrant workers who are being trafficked in other countries.

Taking into consideration the plight of the Migrant workers who are being trafficked in other countries the SETIK organization prepared and released a docu-drama based on real stories of migrants titled “Arabi Lamayage Gedara” or “The House of the Arabian Child” on the 16th June 2008, to mark the 40th anniversary of SEDEC- Caritas Sri Lanka. This one episode tele-drama speaks of a family in Sri Lanka in which the mother migrates to work as a domestic worker and her plight in the working place as well as the daughter who was back at home and her story.

On this same occasion we launched the book “The Travails of Sri Lankan Migrants’ it is a study report done by Rev. Fr. George Sigamoney with the Migrants unit of SETIK Caritas Kandy. This book implies the reality the very painful journey of our own sisters who face the battle of life. The dignity and image of a woman and a mother is esteemed in our Eastern society. But sad to say, this beautiful image is disfigured in the very fact of migration into misoriented social situations that inflict deep inhuman harassments and oppressions. The result is our women are treated very shabbily as slaves.

The deportation of returnees empty handed, stories of women displaced in foreign countries, abandoned by agents, driven away by employers or escaping from employers to save their lives, is the cry we hear, on which we need to focus our attention.

As the reality and consequences are not known by these poor women and mothers, they automatically become the prey and the victims, to all these harassments and these women become burdens to their families and to our society.

The highest remittance of foreign exchange flows to our country, through the hard labour of these women workers according to the recent statistics released by the Central Bank of Sri Lanka the remittances was Rs. 160,502 million. Isn’t it our responsibility and obligation to protect the rights of these women and give them due respect and dignity?

Our book will help to discover the plight of migrant workers. Asian women crying out to us to take necessary action right now. Our commitment and our attitudes can make a difference. This book will open our eyes to the reality of Sri Lankan Migrant women’s’ plight. 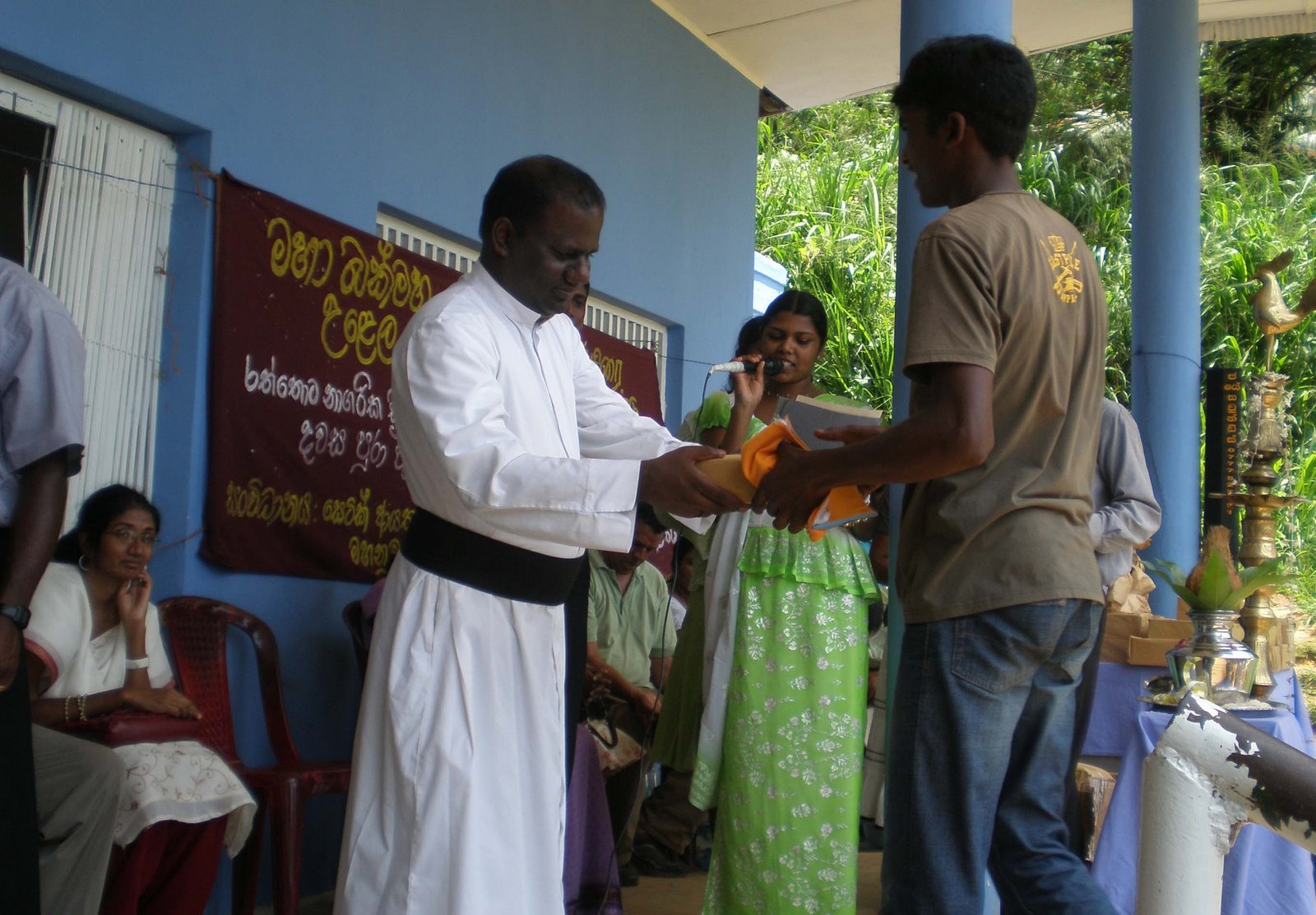 The celebration of the Sinhala and Hindu New Year 2008 was organized by “SETIK” with all the grass-root level groups from the fields where “Setik” programmes are implemented. The celebrations were held on 18th April 2008 at the public ground of Rattota, Matale district, Central Proince. Over 400 peple actively participated in the programme, enabling us to realize our main objective of this programme – which was to build cordial relationship of inter-ethnic groups.

The celebrations commenced with the hoisting of the national flag by Rev. Fr. George Sigamoney – Director JPHDHR Secretariat and the flags of the four main religious by respective religious leaders.

This was followed by a series of about 20 traditional games in which all participated joyfully – children, women and men. The winners were awarded and the programme concluded with the national anthem.

All participants enjoyed themselves and our objective of promoting inter religious harmony and inter ethnic cordiality was realized to a good extent. 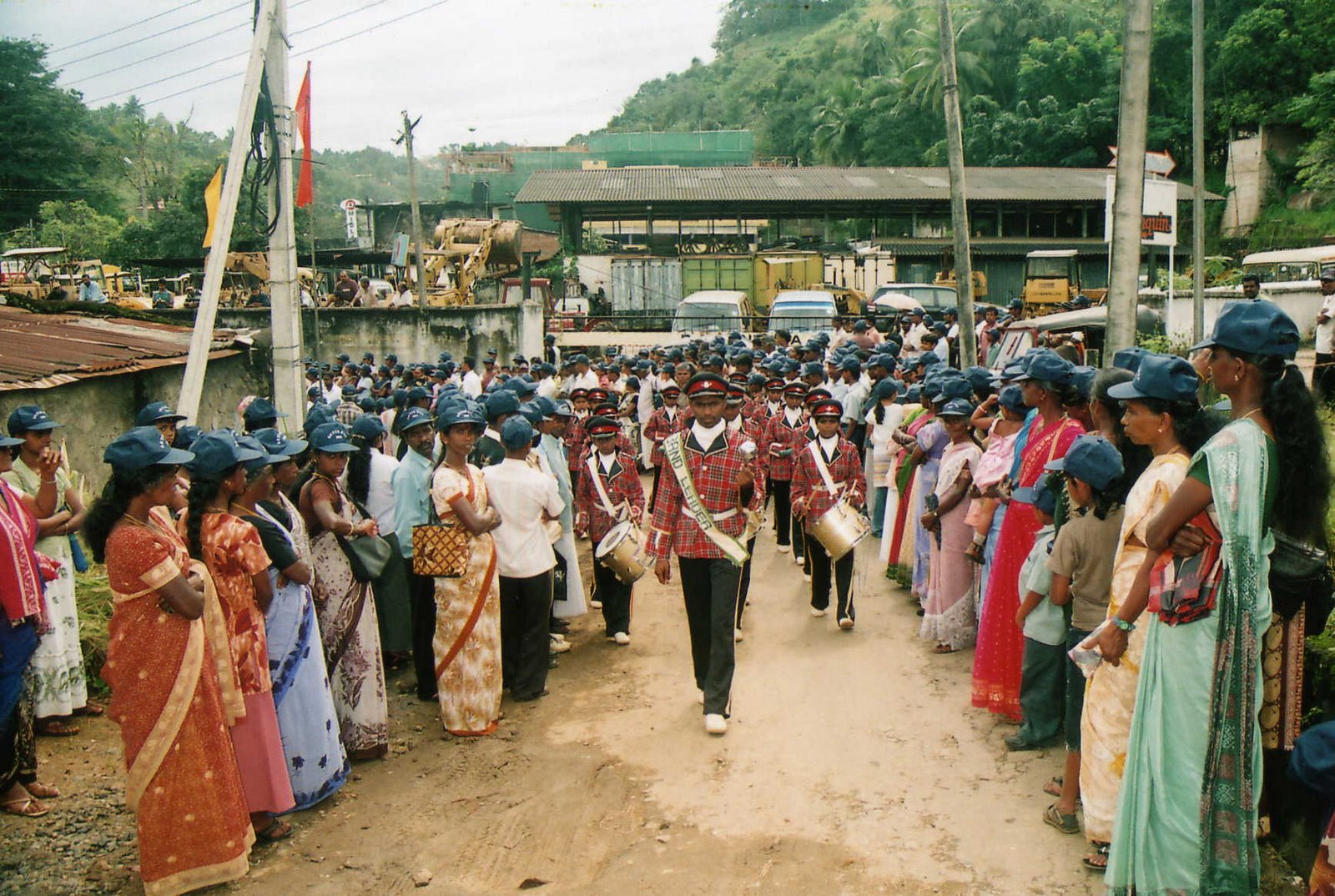 Celebration of the 43rd Anniversary of the “Setik” organization was commemorated by a full-day programme on 19th December 2007 on the theme “Towards Growth”. Communities of people, empowered through the activities of “Setik” were actively involved in these celebrations.

Beneficiaries of the alternative economic development programmes implemented by “Setik” in the three Districts – Kandy, Matale and Nuwaraeliya were provided an opportunity to proudly display their produce in the trade stalls. Fruits, vegetables, needle work, foot-wear, sweet-meats and handicrafts found a ready sales point. The produce displayed and sold in the stalls were of good standard. The beneficiaries of the alternative economic development programmes were enabled to commence their activities by the financial aid given to them by Setik.

The celebrations commenced with the opening of the trade stalls. The invitees were conducted to the auditorium of the Setik in a procession led by Kandyan dancers and drummers They were welcomed and led into the auditorium by the Director of Setik. The traditional oil lamp was lit, a welcome dance was performed by a troupe of children. This was followed by the presentation of a brief history and progress of the Setik organization through the past 43 years of its effective journeying with the people. Each unit gave a debriefing of their activities of the year, through dramas, power point presentations, poems, etc.

The afternoon session of the programme was held at the auditorium – where certificates were distributed to participants at the various training programmes implemented by the “Setik”. Rt. Rev. Dr. Vianney Fernando in his address to those present stressed the importance of various types of training programmes that had been provided by “Setik” – these trainings are essential needs in the society today.

Rt. Rev. Dr. Anthony Harold Perera – Bishop of Gall stated in his address that it is our duty to strengthen and empower people by the programmes we implemented. He said that this day’s programme would encourage and enable our people to proceed further in their journey towards progress. He congratulated the “Setik” organization for its accomplishment. Mr. Steve Alston of Cafod too expressed his appreciation of the achievements of “Setik”. Specially standing bravely on the issues of Human Rights in the Central Province.

Over 2000 people from the Diocese of Kandy – specially from the target regions of Setik participated in the programme of celebrating “Setik Day” Rev. Fr. George Sigamoney thanked all present and all who contributed to the success of the programme.